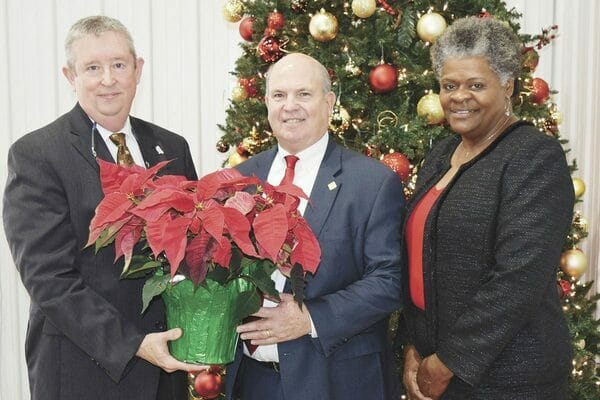 Franklin County’s celebration of everything Christmas began with a luncheon and awards ceremony on Thursday, Dec. 1 in the fellowship hall at the First Baptist Church of Bude.

The presentation sought to recognize three individuals — the grand marshal for the 2022 Christmas parades in both Bude and Meadville along with the community’s “Lifetime Achievement” recipient and the “Hometown Hero Volunteerism” honoree.

“I don’t know if there has ever been a year with a stronger group of people that we want to honor,” Meadville Mayor Lane B. Reed said in opening the program.

“When (Bude Mayor Linda Green) and I started talking about our economic drivers in Southwest Mississippi, we immediately think about the outdoors.

“Historically, timber has been a major driver whether we are cutting it, hauling it or shipping it out by rail. We also hear about things like agri-tourism through agriculture, timber, row crops and cattle because people want to see that.”

Reed said he and Green turned their thoughts toward the impact organizations like the Mississippi Farm Bureau Federation have on the economy.

“This group just so happens to be celebrating its 100th anniversary this year, and we wanted to talk about Mike McCormick — its state president,” Reed added.

“Mike is from Union Church, graduated from Franklin County High School in 1980 and attended the University of Southern Mississippi in Hattiesburg, and he immediately came to mind to serve as our grand marshal for this year’s parades.”

Reed noted the state-wide Farm Bureau body was founded on Oct. 30, 1922 with the local group forming a collaboration with the Mississippi organization in 1930.

“Farm Bureau has been the voice of and advocate for agriculture — whether that is teaching people how to do things in conjunction with the Mississippi State University Extension Service or approaching lawmakers at the local, state and federal levels to promote agricultural interests,” he continued.

McCormick was elected in 2014 to serve as the 10th president of the Mississippi Farm Bureau Federation and is presently concluding his fourth term in office.

He also has a 1,200 acre farm outside of Union Church that has been in his family since the 1820s, and previously served as Jefferson County’s Farm Bureau organization president.

In addition to numerous state and regional committee leadership positions held through the years, McCormick also has the distinction of being a founding member of the Farm Families of Mississippi promotional campaign to open new markets for Magnolia State agricultural products.

“Mississippi Farm Bureau has grown exponentially under Mike’s leadership with more than 178,000 members in all 82 counties,” Reed said. “He is truly the voice that pulls all of that together along with his family and church work and says to leave things better than you found it.”

McCormick said he was grateful to be back in an area that means a great deal to him personally and seeing people he had not seen in many years.

“It is an honor for me to be representing the Mississippi Farm Bureau Federation,” he said. “This group got its start being the legislative voice of the farmer and has grown through the years — and I’m proud to say that hasn’t changed since we started.
“The same challenges that farmers had in the 1920s ... we have those today. The first president of the federation came to Jackson in a horse and wagon, and along the way he got stuck many times.

“Today, we still have infrastructure issues throughout Mississippi and the Mississippi Farm Bureau Federation continues to advocate for improvements to boost our state’s economy.”

McCormick said the strength of the organization lies at the county level with Franklin County’s Farm Bureau Federation leadership being strong throughout its existence.

He pointed to the local group’s unique history in which, during the midst of World War II, Franklin County’s Farm Bureau group sold enough war bonds to purchase a B17 bomber to aide the war effort.

“I want to thank our Farm Bureau members for their involvement and encourage those who are not a member to join,” McCormick said. “Being here and being named grand marshal is a great honor for me and I thank you for that.”

The focus of the luncheon then shifted to honoring this year’s “Hometown Hero Volunteerism Award” recipient — Sara Robertson.

Reed said Robertson is a great example of someone who, without fanfare, does a great deal for those around her.

He also cited her work at the Jones School for the Disabled as an assistant teacher and for her 37 years at Shippers Car Line and later American Railcar, which is now AITX.

“She rose through the ranks and ultimately directed the entire human resources department there — where she helped people,” Reed went on to say.

In 1974, she married Coach John Robertson and the two ran Coach’s Corner in Bude for a quarter century.
Robertson is also passionate about her church work in numerous capacities at Rose Hill Missionary Baptist Church in Franklin County.
She served on the Franklin County Memorial Hospital’s board of trustees and was elected to the board of the local Chamber of Commerce.

“Sara is described by those who know her as one of the fairest and most unselfish people ... it doesn’t matter who you are or where you come from, she treats everyone with the same level of respect and she expects the same in return,” Reed said of the honoree.
Robertson said she was humbly overwhelmed with gratitude to be selected for this community-level recognition.

“Even though I don’t consider myself a hero, I feel like I’m only following the calling that God has on my life,” she noted. “I am honored to be recognized and so thankful that the work that I am so passionate about resonates with others.

“Following my retirement, my time has been dedicated to working in my church — Rose Hill is one of the oldest African-American churches in Franklin County and a church where everybody is somebody.

“Our mission (there) is Christ-centered as we point others to Christ ... I want others not to see me, but to see the Christ in me. I serve in whatever capacity the Spirit directs me.

“I hope this recognition will be an inspiration to others ... don’t allow fear and doubt to hold you back. If God has given you a task to do, He is also going to equip you to do that task.”

In addition, Harold Wentworth was named as the “Lifetime Achievement Award” winner for 2022.

“We had asked Harold on different occasions to accept this award and he refused us, but his family helped change his mind,” Reed said.

“Harold Wentworth loves Franklin County and came to Meadville in the 1940s — remembering a time when Main Street was gravel.”

He served in the U.S. Navy aboard the U.S.S. Missouri and got an opportunity to travel and see the world through his military service.

The county reportedly approached Wentworth in the 1960s about running a local part-time ambulance operation because the funeral home, which had previously provided the service, was no longer going to do that.

“Harold and members of his family ran the local ambulance service for the next 45 years,” Reed said.

“He was one of the earliest EMTs (emergency medical technicians) in the state with the ambulance service in its early days covering Franklin, Adams, Jefferson and Amite counties.

“Harold helped a lot of people through the years and touched many lives along the way. He believes the people of Franklin County are his family and took great pride in helping them for many, many years.”

Reed also shared several humorous stories about Wentworth’s life and some rather tall tales when it came to things he did ranging from when the honoree, as a boy, would tie a string across Main Street in Meadville to see when a car would come through and break it to remembering where he was called to help someone in need.

After the program, Wentworth said he was appreciative for the award he was presented and thanked his family for being with him in accepting the honor.
Following the luncheon, Bude held its Christmas parade at 2 p.m., and Meadville’s procession followed at 5:30 p.m.

Also on Thursday night, the Lillian Torrey Christmas Tree lighting ceremony was held on the front lawn of the Franklin County Courthouse on Main Street in Meadville and Santa Claus visited with children at the north entrance to the county government building.