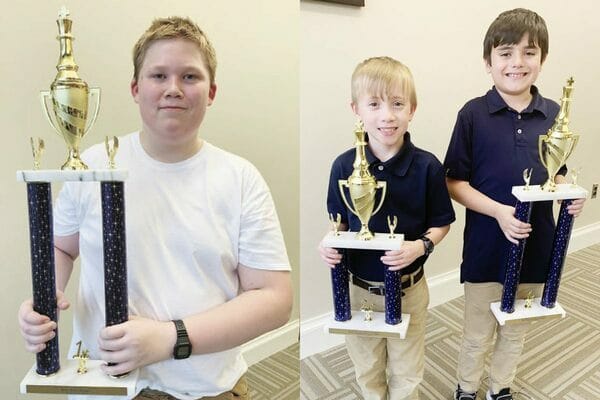 Several Franklin Chess Center students took to the road and air for a series of winter competitions in Mississippi and beyond over the past few weeks.

During the second weekend in December, 10 of them competed in the U.S. Grade Level Championships held in National Harbor, Md.

“This was the largest event of its kind with more than 2,500 players,” said their coach, Jeff Bulington. “I believe as many as a thousand of them were from New York and 10 were from Mississippi.
“For some of our players it was the first time playing in that tournament, but our teams have participated in it in the past.”

Bulington said the local group tied for fifth place in the nation in the eighth grade division and finished in seventh place on tie-breaks.

In the seventh grade section, FC tied for ninth in the country and finished 11th on tie-breaks.

“I thought our players did well overall,” he said. “There were seven rounds played over the course of three days — two on Friday, three on Saturday and two on Sunday — and it was brutal.

“It can be a very draining experience and requires a lot of endurance. And we did well at the end. I think I was most proud of our finishing strong after a grueling pace.”

The next event, held Jan. 6-8, took seven chess representatives — high schoolers Benson Schexnaydre (who played in the “Premier” division) and Parker Wilkinson along with middle schoolers Hutchins, Myers, Marshall, Woodard and Johnson — to Massachusetts to participate in the Boston Chess Congress, which was an all-ages tournament, but primarily featured adult players.

In the Mississippi Individual Scholastic State Chess Championships, held at C Spire’s headquarters in Ridgeland the weekend of Saturday, Jan. 14, third grader Ellis Smithhart claimed top state honors in the K-3 Section and third grader Jackson Perry finished second in the same section with his only loss being to Smithhart.

Additionally, Corbin Duncan tied for third place in the event with his only losses being to both Smithhart and Perry.

“All three — with Corbin being a second grader — did very well and I think it made them happy that they finished strongly.”

Bulington went on to point out Duncan only started playing chess through the center when the current school year started — having never played competitively previously.

“We also had some fourth graders taking part and most of them are new players that scored three-out-of-five,” Bulington continued.

“They did a good job, and we expect them to grow competitively and gain experience from this event. That experience comes in part through spending time with veteran players and watching how they compete.”

The middle school section at the state chess championships turned out to be truly exciting.

Franklin County’s players sometimes had to play each other because the event was not a “team tournament.”

Hutchins said he was tired, but continued to battle.

“The first two rounds were G10-I5, which is 10 minutes with a five-second increment, and I won the first round,” he continued.

“In the second round, I dropped a piece with things starting to get out of hand. I lost that one badly.”

Then — in what might be considered “double overtime” — Hutchins and his opponent faced off in a “blitz” with a victory in the first round going to Hutchins.

“In the second round, I was up a pawn for a good bit of the game and we were getting low on time … down to about 30 seconds … when I queened a pawn and I was not watching my time closely,” he said.

“That meant I had to play really fast, but wound up winning at the end of the game.”

Hutchins jokingly pointed out that he felt like he was “half-dead” from the experience, which included five long rounds going hours at a time over the course of two days.

Hutchins was presented the trophy as Mississippi’s “2023 Middle School Champion.”

“This means a great deal to me,” Hutchins said, holding his trophy.

“I was thankful to have this opportunity and look forward to what the future holds when it comes to being competitive in representing our county and the state.”

The state tourney victory qualified Hutchins to play in the Barber Tournament of Champions — with each state sending one representative to participate in that competition — in late July in Grand Rapids, Mich.

Schexnaydre tied for second in the high school section at the state meet, receiving the third place trophy on tie-breaks.

The chess program is now preparing for the state team championships at St. Andrews Episcopal School in Ridgeland on Saturday, March 4.