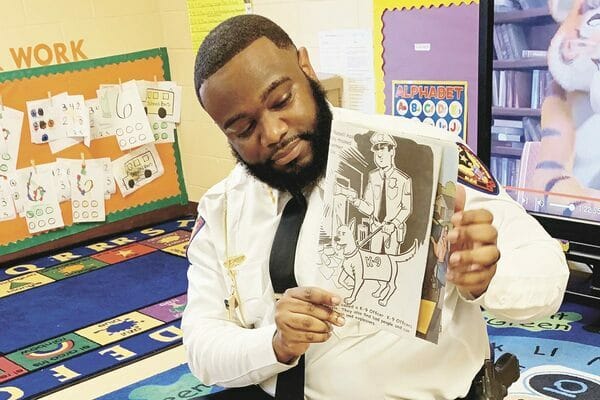 It’s the kind of conversation Bude Police Chief Reggie Cain would rather not have, but knows he has to in his line of work.

When it comes to personal safety, though, Cain’s words were clear and precise because he’s dealing with some of the most potentially vulnerable people in his jurisdiction.

On Friday, Jan. 13, Cain visited the Mississippi Action for Progress Franklin County Head Start Center on Pine Street North in Bude to get across some important messages.

“The first thing I wanted to share was that police officers are there to help and children should not be scared to turn to them at any time,” Cain said.

“The other topic was to always be aware of their surroundings and the potential danger posed by strangers. Personal safety is not something you can bring up once with children — it’s a message that has to be brought up and then reinforced over time.”

Cain said last week’s visit to every classroom at the educational facility will hopefully make his face familiar with the students and set the foundation for each young person to play a role in his or her own safety.

“In law enforcement, it’s about building lines of communication and the best way for us to do that is to allow the children to see and interact with us,” he continued.

“Young people often lack the skills necessary to protect themselves and part of our responsibility — as police or as a parent or guardian — is to teach those basic skill sets when it comes to safety.”

Cain said there is no perfect age when children should be taught about personal safety, but laying the basic groundwork is a must as early as possible and requires refreshers along the way.

“Most of what we discussed on Friday dealt with knowing who their community helpers are — police, firefighters, emergency medical technicians and 9-1-1 dispatchers — and how to get help if they need it,” he went on to say.

“We also wanted to see if they knew what a ‘stranger’ was and for them to say no to things that make them uncomfortable.”

The chief said families can also help reinforce his safety message by taking steps that can build their child’s ability to protect himself or herself in scary situations, including:

• Making sure each child knows his or her full name, address, telephone number and parents’ names.

• Checking first with parents or an adult in charge before going anywhere, getting into any automobile or accepting anything — even from someone known.
• Learning to take a friend or responsible person when going places or playing outdoors — a child should not be left unattended even in familiar surroundings.

• Saying no if someone makes the child feel scared, uncomfortable or confused.

“Children are strong, smart and have the right to feel safe, and talking with them at home and in this kind of setting can drive these points home,” Cain said.

“We live in a small, rural setting, but that doesn’t mean we can be complacent in talking about safety concerns and how to address them. I would rather have these conversations with children a thousand times and never have to deal with a safety concern because we’ve done our job.”

Cain used the opportunity to hand out coloring books with safety messages inside for the children to take home — another aspect to his interactive message.

“It about building trust and sharing a message to keep three things in mind where safety and young people are concerned — caution, communication and confidence,” he said.

Cain said he hopes to spread his message to schools throughout the area in the weeks and months ahead in hopes of building a culture of safety and trust between local law enforcement and Franklin County children.