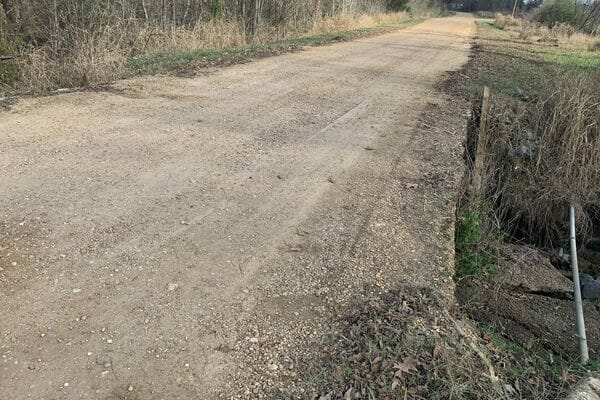 With work progressing on developing the buildings for River Ridge Forest Products LLC in Bude, Franklin County District 3 Supervisor Mike “Dirt” Hunt on Monday, Dec. 5 broached the subject of the need to address a bridge leading to the industrial site.

“I am concerned about the wooden bridge that’s there and we need to look at how we can replace it in the future,” Hunt told county engineer Mike McKenzie.

McKenzie said the structure, which is located adjacent to the railroad track near the Franklin County School District’s bus barn, is technically not a bridge — as it is not long enough to be on the local bridge inventory.

“It is not recognized by State Aid as a bridge, and there is no funding available from that program,” McKenzie noted.

Board attorney Bill Halford also pointed out the structure appears to be partially on railroad right-of-way, and any work undertaken would require communication with the local rail operator to make certain everyone is on the same page.
McKenzie said he believed the wooden structure could ultimately be replaced by culverts — as long as the flow of stormwater runoff is not impeded.

“Without looking at it, it’s hard to say what would be the right size of culvert to place there,” he continued.

Hunt said the owners of the new wood mill have been constructing buildings on the site — since reaching an agreement with the Town of Bude to lease the location this past May — and will likely be opening their doors sooner rather than later thus making work on the access road a pressing concern.

“My worry is the heavy truck traffic that will be going into and out of the mill and trying to cross this bridge or whatever it is,” Hunt said. “It’s up to us to do something to make it safe for those trucks.”

McKenzie said he felt like Hunt and the county had several options to address the road concerns — with the county either taking on the entire cost of project by itself, partnering with the Town of Bude on the work or to do nothing for the time being.

“The first thing you have to consider is whether or not this is your problem to fix,” McKenzie continued. “If so, what part do you want to play in it ... and that will be between you and the Town of Bude.”

McKenzie then told Hunt that if he provided him some direction, he — as county engineer — would do what he could to help with the situation.

“This is basically the replacement of an existing crossing without encroaching on the railroad’s right-of-way,” he continued.

Concerns were also raised during the meeting about a number of underground utilities — including water, sewer and gas lines — in proximity to the crossing in question.

District 4 Supervisor Pat Larkin indicated, based on his understanding, the industry plans to bring logs into the mill site and transport finished products to market.

Halford said the dirt road fronting the mill site also currently has access to Gerard Street to the east near AITX — giving the new industry an alternate ingress and egress route until a decision as to what to do about the wooden overpass is made.

“The eastern entrance would likely add about three-tenths of a mile to get into and out of the mill,” Halford added. “The good thing is that the site is not land-locked because of the other access point.”

In the end, no formal action on the matter was taken by supervisors as Hunt said he will continue to study his options in replacing the structure and how the work would likely be paid for.