A not-so-far-away visitor: Frank the Camel to appear at holiday events in Meadville 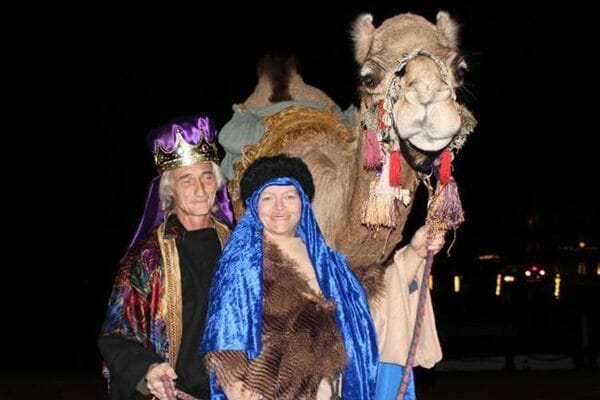 The preparations for Meadville United Methodist Church’s live-action Nativity scene — set for Thursday, Dec. 1 in conjunction with Christmas celebrations in Franklin County — are pretty much complete ... right down to the camel.

“This kind of program has been done in Meadville previously, and we started working to make this and other activities happen in a planning meeting held this past August,” the Rev. Calvin Cosnahan, who serves as MUMC’s pastor, said.

But, there’s a story behind how Cosnahan and this particular camel — known as Frank and who calls Mississippi home — became acquainted through the holidays.

“While I was at Christ United Methodist, I saw a feature article in the Clarion-Ledger (a Jackson-based newspaper) about Frank the Camel and his being the center of attention at Shiloh United Methodist Church’s live Nativity, which is held every year.

“They’ve held their program at Shiloh for decades and that church has permanent scenes that are set up along a quarter-mile stretch. Frank the Camel has been a part of their event for a long time.

“We had a live Nativity, but didn’t have a camel and I decided — as part of my responsibilities at Christ United Methodist was evangelism and community outreach — to add Frank to our program.”

Frank the Camel resides in central Mississippi on a farm near the Morton community, and is much beloved by those who cross his path.

Cosnahan said a camel is probably best described as an oddity in the Magnolia State, and the reaction of those who see the animal — especially children — is one of absolute celebration and delight.

“The only comparison is like going to the zoo to see something you don’t encounter every day,” he continued.

“It’s a neat thing to see the reactions to Frank, but, most importantly, it puts an image with the story of Jesus Christ’s birth and the Wise Men being told through the Nativity.”

Cosnahan’s experience with Frank the Camel at his previous pastoral assignments is helping bring one of the most unique participants to Franklin County’s beloved Christmas celebration.

Frank is slated to take part in Meadville’s Christmas parade at 5:30 p.m., and will then make his way to the outdoor pavilion at Meadville United Methodist on First Street for the Nativity event, which is set to run immediately following the procession until around 8 p.m.

MUMC will also have a variety of other stable animals on display — provided by Pecan Creek Farms — as part of its Nativity scene that Cosnahan said will really add to the experience along with the people who will bring this program to life.

The pastor said there are four things celebrated during the Christmas season as part of the Advent observance, which is part of the expectation and looking forward to an event that is central to the Christian faith.

“Hope, joy, peace and love are the things celebrated during Advent,” he said. “All of those in light of having gone through the coronavirus pandemic and the disease having taken so much from our lives along with finding ourselves so divided on a multitude of issues makes the celebration of Christ’s birth very much needed here and everywhere.”

Cosnahan characterized that miraculous birth as a unifying factor that people can embrace, and MUMC’s live Nativity will put that momentous occasion on full display for everyone to see.

The pastor said this week’s program will hopefully make Christ real to those who witness the story they have heard through the years.

“This is something we wanted to do in reaching our community,” Cosnahan said. “It’s not really for us, as a church, but is where people from all walks of life can participate in something in a real audio-visual way.

“We hope that everyone comes to the Nativity, which will be a walk-through type event, and we will have refreshments and a time of fellowship centered around the birth of Jesus.”
Meadville United Methodist has been busy this fall with programs seeking to reach the community it serves — taking part in October’s Homochitto River Festival along with hosting a family-friendly fall festival during Halloween.

“That’s kind of how I’m wired spiritually — caring for and serving the community along with sharing Jesus,” he said. “Our church wants to be active in reaching children and adults, and we are trying to live our faith on the outside and not just the inside of the church building.

“Our hope is that every time there is an opportunity for us to be involved, we can do that in fulfilling our mission.”

There is no admission charge to witness the Nativity scene with Cosnahan inviting everyone to take part in experiencing the true meaning of the Christmas celebration along with this year’s Advent observance.