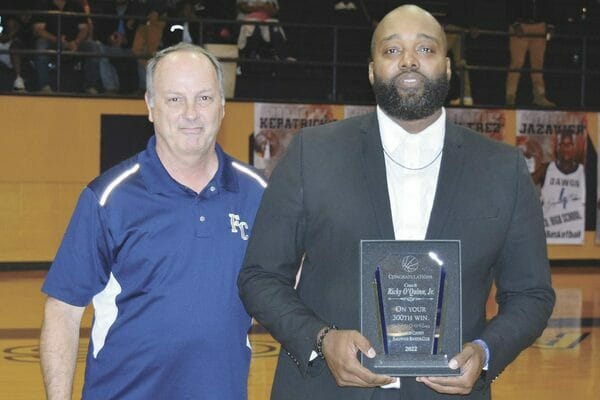 Franklin County High School’s basketball boosters sure know how to keep a secret.

“It came as a complete surprise to me and I am extremely grateful for everyone who put it together,” O’Quinn said with a laugh.

“After the ceremony, I learned they had it planned for three weeks and no one said a word — you would have thought someone would have let it slip. I guess I was the last one to know.”

Always quick to deflect personal praise, O’Quinn said reaching 300 wins is a testament to the young men and women he has coached during the past decade.

“When I first took over for (former FCHS Basketball) Coach (Chris) Jordan, I gave him a plaque at the athletic banquet for his service and thanked him for being a great coach and mentor for me,” he continued. “I said something like he had 500 wins and I had to follow in his footsteps.

“In my first year, my guys might have won five or six games and people were telling me I was a long way from Coach Jordan’s mark.”

All kidding aside, O’Quinn said he was thankful for Jordan’s legacy of success and was proud to carry on a tradition of seeing players reach new heights every season.

“Not only did I play for him, but I had the opportunity to work alongside him for seven or eight years,” he added.

“I learned a lot about what it takes to develop a winning program and the work required to take the game to a higher level.

“Coach Jordan instilled in his players the ability to adapt to situations they faced on the court and that helped to make them winners in the game and in life.

“He coached for 25 to 30 years and had lots of different faces during that time, he also adapted to his situations and that helped set a foundation for what we still do today.”

O’Quinn said the many lessons he learned as a high school and college basketball player and as a young coach truly helped to shape his philosophy of the game and made him the leader he is today.

“I am proud of the standard we have set at Franklin County where basketball is concerned and have built some pretty high expectations,” he continued.

“Really, I’m blessed because I get to coach a bunch of young people who have bought into what we hope to accomplish and achieve as a team, and they’re willing to put in the work to reach those goals.”

Another surprise during the ceremony came when three of O’Quinn’s former teammates — Tre Hunt, Kendric Covington and Darrell Brown — took the court to congratulate their long-time friend.

“Seeing them reminded me of where I came from and that made the night that much more special,” he went on to say.

“I had a lot of battles alongside those guys in practices and games, and there are certainly a lot of memories associated with them. It felt like things had come full circle seeing them there to help me celebrate.”

O’Quinn said as thankful as he was for the honors last week, he praised the work done by the basketball boosters in supporting the program behind the scenes throughout the year.

“After they pulled this off, I have been thanking them constantly for a whole week,” he noted. “These are people who give so much of themselves to help our basketball programs. I really don’t know where we would be without them.

“Everything I need done or want done, the boosters are there for me, and most of the time I don’t even has to ask. For them to come in and honor me the way they did shows me how great they are and the love they have for these programs. Speaking for the coaches and players, we appreciate all of them.”

O’Quinn also expressed his appreciation to his family for their support of his playing and coaching career.

“This is my 18th year at Franklin County and I have been a head coach for 13 years — three of those years as head football coach and 10 years serving as basketball head coach,” he said.

“My family hasn’t missed many games through the years and they have been beside me through the highs and lows along the way. I am thankful for them and for my children and what they mean to me.

“I am extremely humbled by all of this and it reminds me why I love to do this every day and for the chance I have to be around some of the most special people in the world.”