Bulldogs fall in first round of playoffs 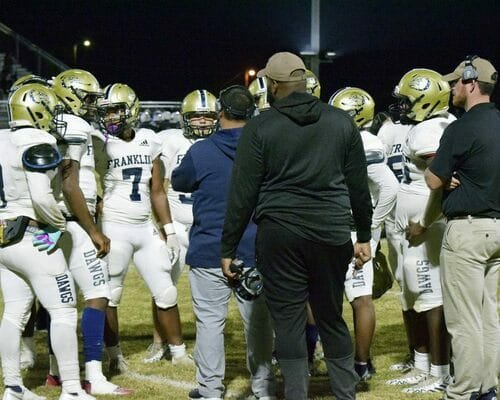 The Franklin Advocate has posted more than 150 pictures from the Class 3A football playoff game between Franklin County and Jefferson Davis County on Friday, Nov. 4. To view the pictures, click on this link to our exclusive dotphoto page -- https://www.dotphoto.com/go.asp?l=franklinadvocate&AID=6845529&T=1

BASSFIELD — Franklin County's varsity football season came to an abrupt close in Friday night's Class 3A playoff opener as the Bulldogs dropped a 48-6 decision to the Jefferson Davis County High School Jaguars, who entered the post-season as the No. 1 seed from District 8-3A.

Despite some notable big plays throughout the night by FC, Jefferson Davis' defense dominated the tempo of the game primarily by keeping the Bulldogs' ground game in check — 24 total carries for minus-23 yards — while FC's aerial attack gained 83 yards on a 4-12-0 performance with one touchdown connection by quarterback Quez Rancifer.

The Jaguars' success on offense was generated largely thanks to 325 yards on 33 carries (an average of 9.85 yards per tote) while sparingly going to the air on three attempts and one completion for four yards along with an interception.

"We played one of the best teams in Mississippi and it showed on many levels," FCHS Head Football Coach B.J. Smithhart said immediately following the game. "I hate this (loss) for our seniors because they stepped up for us all season long and gave a lot to this team through their hard work and dedication. The challenge now falls on the shoulders of our underclassmen to take our program to the next level. We're going to get back to work and try to build on our successes with a focus on making our program better and stronger for the future."

Jefferson Davis took the opening kickoff from its own 35 and drove to just inside the Franklin County 20 on four-straight running plays. Facing a second-and-six scenario at the Bulldogs' 17, the Jaguars were surprised when FC's Tyrese O'Neal jumped into the backfield on a stunt, stripped away the football and returned it 69 yards before being hauled down at the JDCHS 14.

With its first offensive series of the night, FC's Keyundre Felton had no gain on a carry and Rancifer had two passes fall incomplete to set up a fourth and 10 for the Dawgs. Rancifer then hit Donovan Moore in the end zone for the team's lone score in the contest with 8:33 left to play in the first quarter.

The two-point conversion pass attempt by Rancifer fell incomplete and the Bulldogs held a 6-0 advantage to start the game.

The Jaguars answered with three scores in rapid-fire succession with the first attributed to a solid kickoff return to the FC 41 yard line combined with a three-play drive that started with an offside call against the Bulldogs. JDCHS had three running plays of 11, 24 and one yard to put its first score on the board with 7:15 showing on the clock. FC's Felton blocked the point-after kick attempt, but the Jags had knotted the score at 6-all.

Franklin County then fumbled the football on its second offensive possession of the night and Jefferson Davis County recovered the ball near the Bulldogs' 27 and ran four plays to collect another touchdown with 5:01 left to play in the frame. The Jags ran in the two-point conversion only to have the effort negated on a holding call and failed to convert on the second attempt, but took a 12-6 lead.

Another Bulldogs' fumble on the post-touchdown kickoff near the FC 25 turned into more points for the home team. Franklin County's defense was called on a personal foul on the first play of the Jaguars' drive and that moved the ball to the 6 yard line. From there, Jefferson Davis County had a pass incompletion and three successful running plays to record its third touchdown with 1:38 still left in the stanza. A successful point-after kick opened a 19-6 bulge for the Jaguars.

The second quarter belonged to JDCHS with the Jaguars scoring three touchdowns — one thanks to a fumble recovery in the end zone at the 11:04 mark, a 70-yard run with just over five minutes left before intermission and a six-yard scamper to the end zone with 2:40 showing on the clock. The Jags had a successful two-point conversion pass and a pair of point after kicks to expand their lead to 41-6 headed into the locker room for the mid-game break.

For the Bulldogs, though, there were a glimmer of hope in the same frame as FC's Reshon Baker collected an interception less than nine seconds into the period. However, whatever momentum that was gained eroded three plays later when the Bulldogs coughed up the football in its own end zone. From there, Franklin County's offense went three-and-out three times before intermission and was able to put together one five-play drive with less than five minutes remaining in the half.

Facing a running game clock, FC had the ball to start the second half and gave up another fumble on the fourth play of the drive with JDCHS taking over on the Bulldogs' 34. Four plays later, the Jaguars were in for another score — this one from 14 yards out with 5:41 left in the third quarter. The successful point-after kick lifted Jefferson Davis County High School to a 48-6 lead that would hold the rest of the way as the Jaguars were content to substitute liberally from their bench and take the win.

Franklin County, however, had its best drive of the night late in the third quarter as the Bulldogs put together an eight-play series that got as deep as the Jaguars' 2 yard line, but the effort died as the Jefferson Davis County defense stiffened on four down and dropped Rancifer for a loss to take over control on downs.

The Bulldogs' offense was paced by Xavier Rankin, who had 19 yards on seven carries while Tyrese O'Neal gained nine yards on six totes. Felton had a single carry for no gain and Jailon Brown rushed three times for minus-four yards. Rancifer rushed the football seven times for minus-47 yards.

Moore reeled in three of Rancifer's passes for 82 yards and a score while Baker had one catch for one yard.

Defensively, Moore had a stellar night with a team-high 11 tackles with Remontae Cameron collecting six take-downs while Ja Norman and Kameron White finished with five each. Jay Malone and Jaquez Anderson were solid with four tackles each while O'Neal and Baker recorded two apiece.

O'Neal, Rankin and Tyson Windom all had fumble recoveries for the Bulldogs.