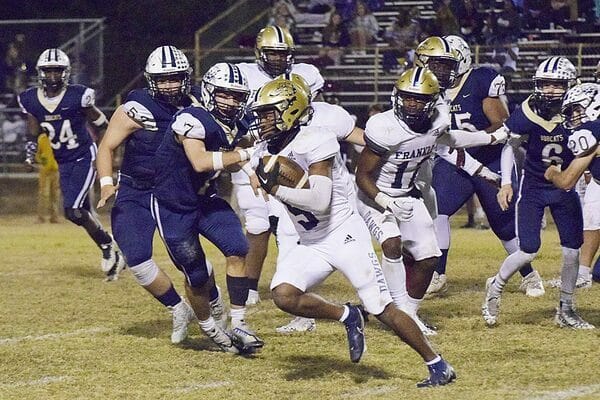 A total of 178 exclusive sideline photos from Thursday's Franklin County vs. Bogue Chitto varsity football game (a 42-3 win for the Bulldogs) can now be viewed on The Franklin Advocate FC dotphoto platform page now by clicking on this link: https://www.dotphoto.com/go.asp?l=franklinadvocate&AID=6844955&T=1

BOGUE CHITTO — If Franklin County's varsity football team was looking for a song title to sum up its regular season finale on the road at Bogue Chitto on Thursday, Oct. 27, it probably would have been Vanessa Williams' pop hit "Save The Best For Last."

That's because the visiting Dawgs had their highest points production of the season — blowing out the Bobcats in the end by a 42-3 margin — while exploding for 301 all-purpose offensive yards in a dominating performance highlighted by big plays from start to finish on both sides of the football.

Franklin County's ground game picked up 217 yards on 25 carries, which was a season-high average of 8.68 yards per tote, while the Bulldogs were 4-6-1 through the airways for another 84 yards.

Quarterback Quez Rancifer led the way in rushing with 67 yards on seven carries along with a touchdown. He also went 4-5-0 passing with Donovan Moore reeling in all four of those completions for 84 yards and two scores. As part of FC's ground attack, Moore also had a pair of rushes for 23 yards to his credit.

In addition, Keyundre Felton had three handoffs for a 50-yard average and two touchdowns — one offensive and the other defensive — to help pace the team with Tyson Windom coming in off the bench in the final frame to gain 37 yards on five totes and recording a score.

"This win meant a lot for our team, especially our seniors who have played a leadership role in getting to this point," FCHS Head Football Coach B.J. Smithhart said following the game. "As a whole, I think our guys really got after it and did a good job all over the field. Now, we get the chance to play bonus football next week in the playoffs, and will get back to business after we celebrate this one a little bit."

Following the opening kickoff, FC had possession of the football to start the game at its own 20 yard line with Reshon Baker gaining 10 yards on the initial handoff. He would finish the night with three carries for 21 yards.

Then Moore broke loose for a 70-yard scamper to the end zone — only to have it called back on a holding infraction against the Bulldogs near the line of scrimmage.

The drive sputtered as the ball was brought back to the FC 20 with Rancifer hitting Moore for a four-yard pickup before two incompletions forced the Bulldogs to punt on a fourth-and-16 scenario from the FC 24.

On its initial drive, Bogue Chitto mounted an 11-play series that moved the ball from the Bulldogs' 45 to as deep as the 15 before FC's defense stiffened. With a fourth and nine from the 17, Bobcats' kicker Andrew Merrell split the uprights on a 34-yard field goal attempt to put the home team on top, 3-0, with 4:41 remaining in the first stanza.

That would prove to be Bogue Chitto's only points of the night and FC controlled the tempo of the game from that point forward.

Franklin County's offense went to work on its second drive and started moving the ball from its own 35 to the Bogue Chitto 14 — thanks to a 13-yard gain by Baker followed by a 38-yard run by Moore. From there, Tyrese O'Neal was dropped for a six-yard loss followed by an unsportsmanlike conduct penalty, a holding infraction and a false start step-off that put the ball back to the Bobcats' 45 yard line.

With Moore playing quarterback and facing a second-and-41 scenario, he launched a pass downfield that was intercepted by the Bobcats' Merrell. However, that play resulted in a roughing-the-passer call against Bogue Chitto that negated the take-away and gave FC a new set of downs at the Bobcats' 30.

Rancifer returned as signal caller and rushed twice to get to the end zone — the first carry for 12 yards and the second took him in for the score from 18 yards out with 1:16 showing on the clock in the first quarter.

Baker attempted a two-point conversion pass that failed, but Franklin County took a 6-3 lead at that point.

The Bulldogs padded their lead in the second quarter as the defense came up big in blocking a 51-yard field goal attempt by Merrill with 4:07 remaining before the midgame break. Keyundre Felton collected the football and raced 64 yards in the other direction for a FCHS touchdown. Rancifer hit Baker on the two-point conversion pass to open a 14-3 bulge over the Bobcats.

The ensuing kickoff involved more fireworks for the Dawgs as Jaiden Hunt came up with a key fumble recovery and put FC in great field position near the Bogue Chitto 34.

Rancifer hit Moore for a 14-yard pickup and O'Neal gained a yard on a handoff from near the 20 yard line.

Now facing a second and nine, Rancifer threw from the pocket and hit Moore for a 19-yard scoring strike with 2:27 left in the first half.

Rancifer's two-point conversion pass to Hunt -- stymied by a false start call — was stopped near the line of scrimmage.

The teams recorded a fumble apiece before the end of the half that prevented any additional scoring efforts and FC was able to take its 20-3 lead into the locker room at the half.

The Bullogs didn't miss a beat to start the second half with two scores on two possession — both two-play drives.

The first score, which came at the 7:37 mark in the third quarter, saw Felton cover 40 yards on back-to-back carries for a touchdown. The second drive covered 57 yards with Felton picking up 10 on the initial handoff and Rancifer connecting with Moore for a 47-yard strike on first down with 1:35 showing on the clock.

Rancifer had a two-point conversion pass fall incomplete on the former score while he ran in the post-touchdown conversion for the latter to boost the Bulldogs to a 34-3 advantage.

In the fourth quarter, Franklin County substituted liberally with quarterback Detrick Starks and backs Jailon Brown and Tyson Windom driving the ball from their own 38 to the end zone. In fact, Windom have five totes in a row to cap the series, gaining 37 yards in the process and scoring from 10 yards out with 3:41 left to play in the game.

Starks ran in the two-point conversion to set the final margin of victory for Franklin County at 42-3.

Defensively, FC's Hunt was a top performer with nine tackles, a sack and a fumble recovery and O'Neal recorded seven take-downs.

Felton and Ja Norman combined for six tackles and a sack apiece while Brown also collected six tackles. Kameron White had four tackles for FC with Johnathon Shell, Jay Malone and Baker finishing with three each.

Larry Pernell had two tackles and a sack with Jamal Flowers also coming up with a sack against Bogue Chitto.

The victory boosted Franklin County to a 6-4 record during its 2022 regular season campaign with the Bulldogs earning an opportunity to play in the first round of the Class 3A playoffs on Friday, Nov. 4 at the No. 4 seed coming out of 7-3A.

FCHS will play on the road at the winner of the Jefferson Davis County-Saint Stanislaus contest — with both those teams vying to be the No. 1 seed from District 8-3A — that was to be played on Friday, Oct. 28