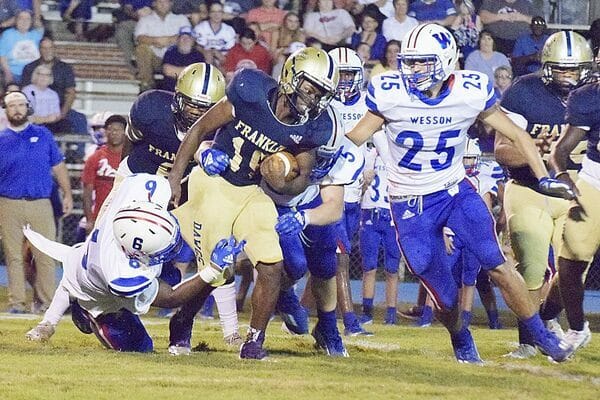 FOR PHOTOS FROM THE FRANKLIN COUNTY-WESSON FOOTBALL GAME, CLICK THIS LINK: https://www.dotphoto.com/go.asp?l=franklinadvocate&AID=6843264&T=1

In the end, all the boxes necessary for a milestone gridiron victory were checked off.

Franklin County's varsity football team did what it had to do — producing offensively and performing defensively — in knocking off Wesson by a 19-13 margin on Friday, Sept. 2 at Louie Mullins Memorial Stadium in Meadville.
The hard-fought ball game by the Bulldogs resulted in the team's second victory in as many weeks and accomplished what many skeptics suggested would not happen.

"I was really proud of how our guys stepped up in every aspect of the game," FCHS Head Football Coach B.J. Smithhart said after the outing. "This was one of those moments where we made good things happen on offense, defense and special teams all night despite a few hiccups. We had some guys have issues late in the game due to the heat, but we kept battling and dug deep to win."

Smithhart specifically pointed to a pair of late defensive stops that helped keep Wesson from scoring as being key to the outcome of the contest.

"We were able to stop them on two series after we scored the go-ahead touchdown in the fourth quarter," he continued. "Those stops were about as big as they come in football. I think this win says a lot about the caliber of guys we have and their desire to keep getting better."

Franklin County's offense gained 127 yards on 32 carries while going 7-16-0 through the air on quarterback Quez Rancifer's arm for another 113 yards. Wesson's ground game was limited to 80 yards on 32 totes (a 2.5 yards per carry average) while the passing attack went 12-24-0 for 124 yards.

Wesson drew first blood in the contest on its initial offensive drive — a seven-play, 65-yard series that was aided in large part by four offside penalties against the Bulldogs.

Cobras' quarterback Will Loy connected with wide receiver Justin Hailey on a fourth and goal from the Franklin County 10 for the aerial touchdown. Kicker Patrick Coleman punched through the point-after kick to give Wesson an early 7-0 advantage.

Franklin County answered immediately on its follow-up offensive series resulting in a six-play drive that started with three carries by tailback Tyrese O'Neal and Rancifer that gained a combined seven yards. On a fourth and three from the FC 37, Wesson was called for lining up in the neutral zone to give the Bulldogs a new set of downs at their own 42.

From there, tailback Keyundre Felton gained a yard and Rancifer threw an incomplete pass to set up a third-and-nine scenario. Rancifer then dropped into the pocket on the next snap and connected with receiver Reshon Baker for a 57-yard precision strike for the touchdown with 2:19 remaining in the first quarter.

Kicker Dallas Broom's point-after kick attempt failed to split the uprights, but Franklin County had pulled to within a point of Wesson's lead.

The Cobras held the football offensively through the remainder of the frame and was able to score on a 29-yard pass play from Loy to receiver Deshawn Smith to cap a five-play drive with 11:52 showing on the clock in the second quarter. Coleman's point-after kick attempt was no good for a 13-6 lead over FC.

The Bulldogs' yanked the game's momentum back when Donovan Moore collected Wesson's post-scoring kickoff and raced 80 yards in the other direction for a Bulldogs' special teams touchdown some 16 seconds later. Broom's post-touchdown kick was true and Franklin County had knotted the game at 13-all.

The teams traded possessions twice through the remainder of the first half with neither program finding the necessary spark to make it into the end zone before the mid-game break.

The stalemate continued through the third quarter and would not be broken until the fourth frame when FC began a methodical nine-play, 64-yard drive toward the end zone.

The series started with a 12-yard pass completion from Rancifer to Moore and a five-yard aerial gain when Rancifer found Baker on the next play.

Felton picked up six yards on the ground to give the Bulldogs a first-and-10 at the Wesson 40 yard line. From there, tailback Jailon Brown was stopped for a two-yard loss and a Rancifer pass fell incomplete.

Now facing third-and-12, Brown took the handoff from Rancifer and exploded for an 11 yard gain to give the home team a fourth-and-short-one scenario. Rancifer called his own number and raced ahead for five yards on the next snap to pick up the first down at the Cobras 26.

Felton carried the ball for a four yard gain on the next snap and Brown finished carrying the mail with a 22-yard scamper toward the goal line for another FC touchdown with 8:03 left to play in the contest. Broom failed to covert on the extra-point kick following the score, but the Bulldogs had opened a 19-13 bulge.

Wesson got the ball back and began to march down the field thanks to several impressive throws by Loy, including a 28-yard completion to set up a first-and-goal from the Franklin County 1 yard line. The Bulldogs' defense mounted a tremendous goal line stand and Wesson coughed up the football just outside the end zone. FC's Moore recovered the loose pigskin to end this particular scoring threat.

The Cobras were called on an unsportsmanlike conduct penalty and that moved the ball from the 1 yard line out to the 16 — giving Franklin County some breathing room to start a short-lived offensive series with 4:26 remaining in the game.

FC's offense went three and out and punted the ball over to Wesson with 3:14 showing on the clock in the final stanza.

Wesson went to work offensively, but the FC defense — despite a personal foul penalty — swarmed again and put an exclamation point on the affair with a key fourth down stop by stuffing Loy for a loss and ending yet another scoring threat by the Cobras.

Franklin held the football for the final 1:30 in the outing — with a drive that was spurred by a 13-yard gain by Xavier Rankin that produced a needed first down late that allowed Rancifer to take a knee to end the game.

In addition, Baker tacked on nine yards with a single carry as teammate Rankin rushed twice for eight yards.

Baker was FC's top receiver with 71 yards on four snares and Moore had three catches for 42 yards.

Defensively, the Bulldogs had three players — Felton, Brown and Larry Pernell — with nine tackles each. Peyton Touchstone had eight take-downs for the FC defense with Jaiden Hunt and Rankin added seven each.

Touchstone and Remontae Cameron both recorded sacks for Franklin County and Moore had a fumble recovery.

The Bulldogs are slated to travel to North Pike on Friday, Sept. 9 for the team's first road contest of the regular season. Kickoff for the contest is set for 7:30 p.m.