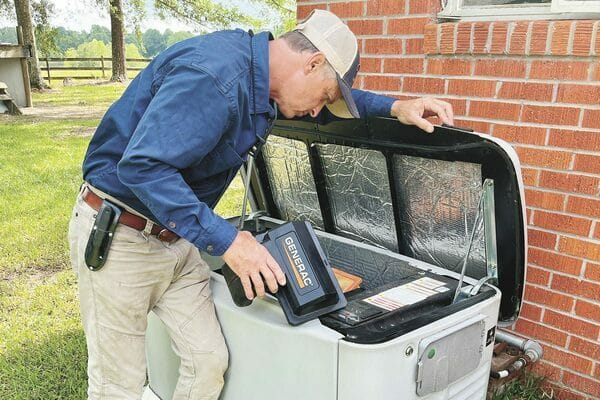 Miss-Lou Power Generation LLC owner Norman Stevenson said he is in the business of putting a smile on his customers’ faces every time the power goes out.

“(Buying the business) was definitely a God-thing,” Stevenson said. “I didn’t know this was what God had prepared for me to put food on the table and to make a living and support my family.

“Ricky hired me to help him, and the next couple of days after he hired me, he was wanting to train me to the point that he and I felt comfortable I could do the job without any supervision.

“I helped him for about 10 months, and he offered to sell me the business. He offered me the whole business, but all I wanted was the generator portion. He sold it to me, and I’ve been wide-open, straight-ahead ever since.”

Stevenson now sells, installs and maintains generators as well as troubleshoots problems people might be having with their units.

“You want to look at it at least once a year to make sure the battery is still working properly and it’s charged, and you want to test the generator while you’re there to make sure everything is working like it’s supposed to.”

While hurricane season is commonly thought to be the main time people think about buying generators, Stevenson said the business tends to be a year-round venture.

“Everyone remembers the ice storm,” he said in referencing the February, 2021 storm that left thousands throughout the region without power for several days.

As for what size generator is the best in each setting, Stevenson uses an amp meter to determine what will best suit each customer’s needs.

“I ask the customer to turn on everything in the house that they are certain they want to run when there’s a power outage,” he said.

“While they’re turning it on, I’m watching my amp meter and I’m adding the amps to determine what size generator will be best for them.”

According to Stevenson, one of the main challenges he faces as a small-business owner is doing the job alone, but it’s rewarding to see his customers happy when the job is done.

“I always like to put a smile on all my customers’ faces because I take pride in my work and I want to please people,” he said.

Miss-Lou Power Generation isn’t the first business Stevenson has called his own. He also owned Stevenson Dairy Inc., which was based in Amite County’s Liberty community.

“That was back when the dairy life used to be fun, about 30 years ago,” he said.

“The best job that I ever had in my whole life was working for Herring Gas, because there are so many people that buy gas from them who need help,” he said.

“I loved doing it because I knew I could do the job and I could make them happy and make them smile. I just like helping people.”

He currently resides in Liberty with his wife of 22 years, Danielle, and their three children — Nathaniel, Nadellia and Daniel.

For sales and service, Stevenson’s Miss-Lou Power Generation LLC can be reached by calling 601-669-4949 or he can be contacted by email at normanstevenson00@icloud.com.

In his spare time, Stevenson can be found attending services at Franklin County’s Landmark United Pentecostal Church or fishing at his pond.

He also enjoys grilling at the camp owned by his brother, Clint Stevenson, and inviting friends and family to eat.