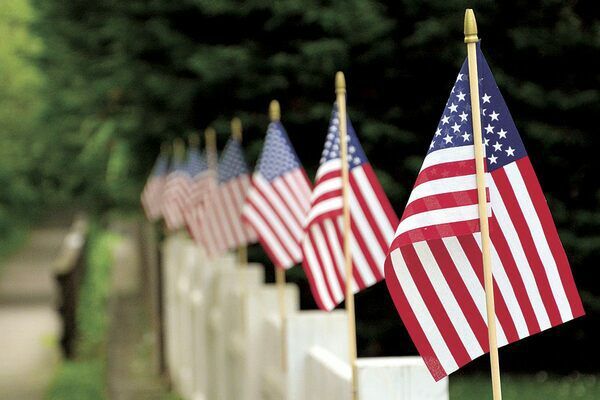 People from across Franklin County came together at Midway Cemetery early Sunday morning to remember the price paid for the freedoms enjoyed by those who call America home.

American Legion Post 40 and its Auxiliary hosted the commemorative service to honor the memory of soldiers who gave their lives in defense of the nation.

The service opened with a prayer offered by Brother Tony Mullins, the Pledge of Allegiance led by Auxiliary Secretary Melinda Arnold and the singing of the National Anthem by Connie Arnold.

Post Commander Grady Fleming then asked Mark Davis to speak to those in attendance about what Memorial Day means.

“I have a few thoughts, but one of the first ones that came to my mind was, ‘What do I think about when I think about someone who has served?’” Davis began.

“When I think about that, it dawns on me that I don’t think about some person I don’t know that maybe I’ve read about in a history book, but I think about people that I know and love.

“I do love and appreciate our veterans, but today we honor those who gave their lives. Since the American Revolution, this nation has lost over one million men and women, whether through death in combat, a death during the war that may not have been related to combat or (in) some training exercise.

“When you think about how young we are as a nation, over one million (deaths) is an awful lot. And that tells me that we have paid such an enormously high price to enjoy the liberties and the freedoms that we have.

“So I wanted to take just a few moments today to stand here and to say thank you, and to encourage us all to live our lives in such a way that is befitting of that high cost. Our freedoms genuinely are not free. Someone gave everything so that we could live the way that we do.”

Following Davis’ comments, Post Adjutant Gabriel Scott read the names of the fallen that are listed on the remembrance marker located in Midway Cemetery.

The marker is inscribed with the following names of those in Franklin County who died in military service:

A floral arrangement was placed at the base of the monument by Auxiliary President Hilda Peeler in honor of those listed.

To end the service, “Taps” with echo was played by Franklin County band students Drew Berryhill and Anthony Williams.