Citizens get chance to voice views on cannabis at Supervisors' meeting 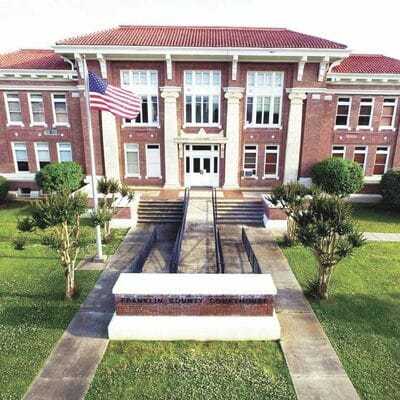 The Franklin County Board of Supervisors held its much-anticipated public hearing on Monday, May 2 in regards to the cultivation, processing, sale and distribution of medical marijuana as is laid out in the Mississippi Medical Cannabis Act.

All 82 of the Magnolia State’s counties as well as towns and cities were each given the chance to opt out of allowing medical marijuana to be grown, processed or distributed in their respective jurisdictions.

Hilda Peeler and Jack Hollingsworth — concerned citizens who had addressed the panel previously asking them to opt out of the act — spoke at the hearing, along with Mike Guice, Charles Chapman and a former sheriff, James Newman.

“My thoughts (are that) the wisest thing to do would be to opt out, and then later we can opt back in,” Hollingsworth said.

“I’m not against people that need medical marijuana getting it, I just think it’s going to bring with it a lot of problems — problems we haven’t seen yet, haven’t thought of yet … you can say it’s going to be controlled, but you’re not going to be able to control that.

“It’s not going to be controlled as much as they make it out to be. That’s my opinion. I’d just like to encourage y’all to take the high road and opt out.”

Newman asked the board if they had done their homework, if they had talked to reputable doctors about the issue and if they knew what was going on behind the scenes.

“Do you know what percentage of people are really recreational users of marijuana?” he asked.

“If I had somebody that was dying of terminal cancer or (had) severe back trouble and that was the only way to get some help, I’d be a 100 percent for it.

“If I had terminal cancer right now or severe back trouble, I would want whatever it took to ease (the pain). But how can you control it? There’s a lot of unknowns in this. Sometimes, it’s a good idea to wait and see.”

He also brought up concerns that the brunt of law enforcement problems in the county caused from the MMCA would fall on the sheriff’s office and suggested the panel wait and see how other jurisdictions are able to control it before deciding to opt in.

Chapman asked the board if they had taken enough time to study the issue.

“I think they’ve done their homework on this and that’s the reason they’re opting out. I’m just saying, I don’t think our homework’s been done enough for us to opt in. If the citizens vote to get a referendum together, let the citizens decide. It should be their choice anyway.”

The board took all comments into consideration.

According to the election results, 58.15 percent of Franklin County residents voted for the approval of one or both of those measures, which were ultimately overturned by the Mississippi Supreme Court in 2021.

“If you read on through the (MMCA), it’s also population based,” District 4 Supervisor Pat Larkin said.

Larkin made a motion to allow the MMCA to go into effect in the county, which was seconded by District 3 Supervisor Mike “Dirt” Hunt.

The remaining members of the board also voted in favor of the motion.

In other action during the meeting, supervisors:

• Accepted a bid from Alan Coleman Construction for Local System Bridge Program Project 19(17), which is for work to be completed on Bonus and Martin Bonds roads.

Alan Coleman Construction priced the project at $664,588.40, which was deemed to be the lowest and best bid received.

• Approved purchasing a 61-month, 60,000-miles extended warranty for a recently purchased van for the county coroner.

The warranty, reported to cost $2,425, will provide bumper-to-bumper coverage as well as coverage on all electronic parts. • Gave approval to pay $1,783.54 in fees to Belinda Stewart Architects for the courthouse renovation project, which will include replacing rotten windows and sills.

• Read a letter from the Office of State Aid Roads saying that State Aid Project 19(74) — Knoxville Road — was approved.

• Received a letter from Franklin County School District attorney Lane Reed showing the reclassification of a farm-residential lease to a forest land lease.

The next regular business meeting of the Franklin County Board of Supervisors will be held at 9 a.m., Monday, May 16.