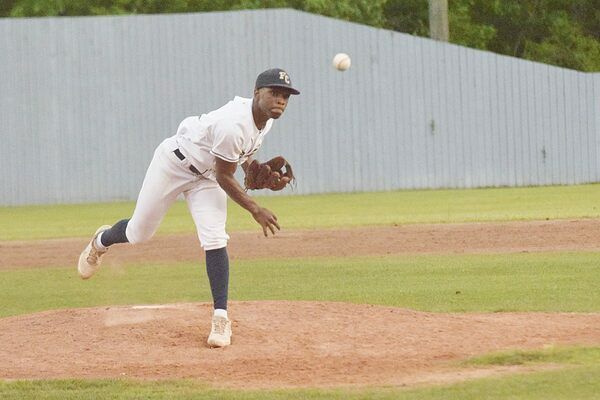 Franklin County High School's baseball run came to an abrupt conclusion on Tuesday, April 26 as the Diamond Dawgs dropped a heartbreaking 23-5 decision to Saint Patrick's Fighting Irish in the last game of the best-of-three initial round of the Class 3A playoffs.

The teams had sought to play to see who would advance to the second round of the post-season on Monday, April 25, but heavy rain forced a cancellation of the game until the following day in Franklin County.

The Bulldogs, who saw their campaign end with a 16-4-1 mark, mustered seven hits in Tuesday's contest, but committed six errors and had seven batters go down on strikes in a mercy-rule shortened five-inning contest at The Swamp.

For the win, the Irish — the No. 4 seeded team from District 8-3A — recorded 10 hits along with 14 walks and did not see a single batter strike out.

Irish standout Cohen Wienhofer did some the biggest damage to the Bulldogs — thanks to a double, a triple, a home run and a grand slam — as he put up a game-high eight RBIs.

Additionally, two Saint Patrick pitchers, Otis Brooks and Bryk Bucklar, threw 42 and 43 times, respectively, and successfully worked to keep FC's bats in check throughout much of the game.

In starting the bottom of the third and down by 17 runs, Franklin County's Donovan Moore sent a shot over the left field wall for a solo home run to kick off this particular Bulldogs' at-bat.

Ridge Clanton then came on to stroke a line-drive single to center, and would come home for his team's second run thanks to a one-out. follow-up double to right by Quez Rancifer.

In addition, Larry Pernell would reach base on a Saint Patrick error — one of the three committed by the Irish in the game — but both he and Rancifer would be left stranded as Noah McCormick and Dawson Halford both struck out to end the frame.

In the bottom of the fourth, Jamari Tolliver reached on a walk and scored his team's third run on a subsequent sacrifice fly by Moore to center and cut the Irish lead to 15.

FC's final runs came in the latter half of the fifth when Dalton Meadows drew a lead-off walk and Pernell recorded a home run over the left field wall to plate both himself and Meadows.

Moore and Pernell were both 1-for-2 in the contest with one run, two RBIs and a homer each to their credit. Pernell was also one of three players to reach on an Irish error.

Meadows went 1-for-2 with a run and a walk while Terrance Fields was 1-for-1.

Clanton and Rancifer finished 1-for-3 with the former scoring once and the latter collecting a double, an RBI and a strikeout.

McCormick wound up 1-for-4 at the plate with two strikeouts and advancing to base on an error.

Tolliver went 0-for-1 with a run, a walk and a strikeout.

Dakota Chisholm was 0-for-2 and reached once on an error while Halford and Peyton Hebert were 0-for-1 with all three players striking out once.

Franklin County pitched by committee in Tuesday's contest — with five Bulldogs hurlers taking the mound over the course of as many innings.

Tolliver opened the game and worked one-and-a-third innings. He was tagged for seven runs (three of those earned) on two hits and three walks.

Moore worked two-thirds of an inning and gave up three runs (all earned) on one hit — a home run — while walking three Irish batters.

McCormick came in to start the third, and threw 14 total pitches, and gave up four runs (all earned) on one hit. He also walked three during his tenure.

Halford was credited with the pitching loss and took over for two-and-a-third innings. He surrendered nine runs (five of those earned) on six hits and walked four.

Hebert took the mound for the remaining two-thirds of an inning and threw a total of 15 pitches and gave up a lone walk.

The Bulldogs, led by Coach Michael Ward and Assistant Coach John Costilow, enjoyed a solid run during the season with an impressive 10-0 record in District 7-3A play and entered the post-season as a No. 1 seed.