FC baseball: Down to the wire in playoff opener 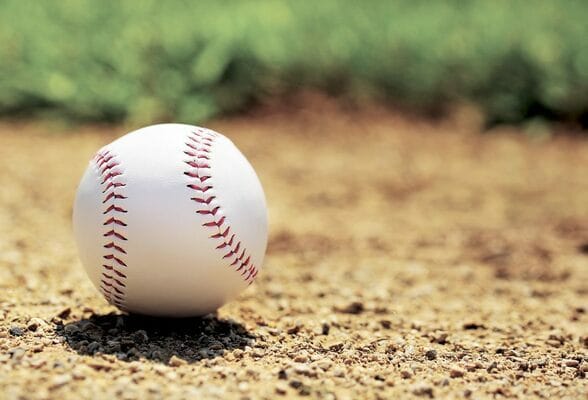 Franklin County and Saint Patrick wound up splitting the initial contests in their best two-of-three, first-round 3A baseball playoff series this past weekend.

The teams were tentatively slated to battle on Tuesday — moved from Monday due to heavy rainfall that soaked The Swamp — to decide who would advance to second-round action against the Clarkdale Bulldogs of Meridian starting Friday, April 29.

Due to printing deadlines, results from the third-and-deciding game will appear on our website at www.franklinadvocate.com.

The two teams collected 10 hits apiece and committed two errors each, but the Irish seemed to have all of the luck — thanks to four runs scored in the first inning that forced the visiting Bulldogs into a catch-up posture the rest of the way.

In the bottom of the first, Saint Patrick got things started thanks to a triple, having a batter hit with a pitch and then blasting a double to plate two early runs.

From there, an FC error and another double by the Irish helped put the home team on top, 4-0.

To start the second frame, FC’s Terrance Fields stroked a one-out single to right, but was ultimately picked off at first.

Larry Pernell then blasted a triple to center and would score his team’s initial run on a follow-up single by Dakota Chisholm.

Both programs would go scoreless in the third and fourth innings, with FC able to tie things up at 4-all in the top of the fifth.

Facing one out, the Bulldogs’ Ridge Clanton reached after being hit by a pitch and got into scoring position on a subsequent double to left by Dalton Meadows.

Quez Rancifer’s two-out single to center was sufficient to push both Clanton and Meadows across home plate to pull the Diamond Dawgs to within one run of Saint Patrick’s lead, 4-3.

Fields followed with another single to center before Pernell reach on an Irish error, which also allowed Rancifer to plate FC’s tying run.

In the bottom of the frame, Saint Patrick was able to score two runs to break open the stalemate as FC issued a two-out walk, gave up a single and then saw the Irish blast a triple that scored two baserunners before the side could be retired.

Saint Patrick added a lone insurance run in the bottom of the sixth to seal the victory.

Three FC batters had two hits each — Meadows was 2-for-3 with a pair of doubles, a run scored, a walk and a strikeout while Fields and Pernell were both 2-for-4 with the duo striking out once.

Pernell, who recorded his team’s lone triple, scored once in the contest and also reached on an error.

Chisholm, Donovan Moore and Jamari Tolliver all went 1-for-3 for the Bulldogs with Moore being hit by a pitch and striking out once while Tolliver struck out twice.

FC’s Chisholm had an RBI to his credit.

Rancifer recorded a 1-for-4 night with a run scored, two RBIs and a strikeout.

Clanton went the distance on the mound for Franklin County and gave up seven runs (six of those earned) on 10 Irish hits.

He struck out three, walked three and surrendered a home run to Saint Patrick.

With 115 pitches thrown, Clanton’s strike percentage was 60.9 (with 70 of his throws being called strikes).

FC plated three runs in the bottom of the first with Saint Patrick scoring three of its own in the top of the second to create an early stalemate.

That tie would not be broken until the Diamond Dawgs exploded for eight runs in the bottom of the fifth followed by two more in the sixth.

Rancifer had a stellar night at the plate with a 3-for-4 effort that included three runs, four RBIs, a home run and a lone strikeout.

Moore and Fields were both 2-for-3 with two runs scored by each batter.

Specifically, Moore had a double, a triple, two RBIs and a strikeout while Fields accounted for one RBI.

Pernell was 2-for-4 with a run and four RBIs.

Chisholm finished 0-for-3 with a strikeout.

In the bottom of the first, Meadows started the initial scoring drive with a two-out walk and a single by McCormick helped put runners on the corners for FC.

A three-run homer by Rancifer gave the Dawgs the early lead, but Saint Patrick charged back with three runs thanks to some early Franklin County miscues, including hitting an Irish batter with a pitch, an error at third and a passed ball.

The 3-all score would stay in place through the bottom of the fifth when FC began to make its move.

Moore started things off by reaching after being hit by a pitch and Clanton singled to right to push Moore in for the score.

From there, Meadows drew a walk and McCormick reached on an Irish error.

Rancifer stroked a single to left that scored Clanton for a 5-3 Bulldogs’ advantage.

Another single to left, this time by Fields, resulted in Meadows plating his team’s sixth run.

Two more scores from McCormick and Rancifer came after Pernell laid down a single to right before FC got its first out.

With the Dawgs leading 8-3, Tolliver singled to short to load the bases with Fields now at third and Pernell moving to second.

Moore then doubled to center to push both Fields and Pernell in for two more runs, but Tolliver was taken out en route to third base for a second out.

Clanton reached on an error to put runners on the corners once again before Meadows hit a line-drive single to right that allowed Moore to come home for an 11th run in the contest.

Clanton was ultimately called out to end the stanza as he advanced toward second.

In the latter half of the sixth, Rancifer launched a one-out single and Fields was hit by a pitch to put runners on the bags.

From there, both Rancifer and Fields would steal to put themselves in scoring position.

Pernell hit a hard ground ball single to left that allowed the two Dawgs’ runners to score for the win.

FC’s Clanton, McCormick and Meadows all reached base on errors during the contest

The Bulldogs committed two of the game’s six total errors.

Meadows took the win on the mound by limiting the Irish bats, primarly due to eight strikeouts and only three walks issued.

In throwing 106 pitches in the outing, Meadows had a pitch-to-strike ratio of 64.2 percent.