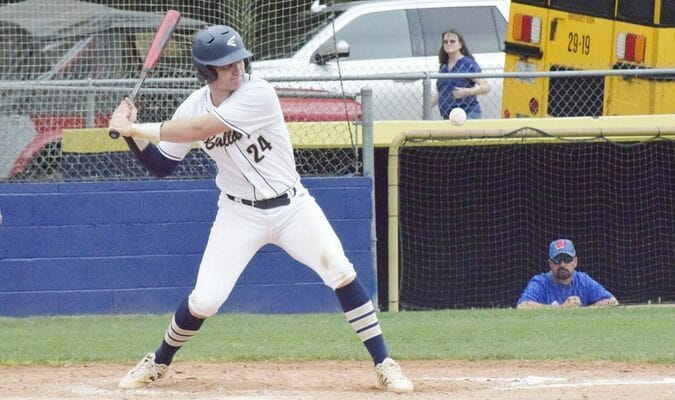 Franklin County's Dalton Meadows stroked a three-run homer to help lift the Bulldogs' varsity baseball team to a 6-5 win over Wesson to claim the 7-3A district championship on Tuesday, April 19.

Neither torrential rains nor being seemingly snakebit on the field over the course of three innings in the regular season finale Friday, April 15 could deny Franklin County's varsity baseball team a come-from-behind, 6-5 win over the Wesson Cobras when the delayed contest was settled on Tuesday, April 19.

In the April 15 afternoon game, strong thunderstorms washed out play between FC and Wesson at The Swamp just as the fourth inning was getting started.

Add to that the fact Wesson had jumped out to a 4-0 lead over the lethargic Diamond Dawgs in the rain-shortened affair.

Those factors would have prompted some teams to consider folding their tents, but the never-say-die Dawgs dug in on Tuesday night after trailing by as many as five runs — and earned a victory that allowed them to finish 7-3A district play with a 10-0 record and as 2022 regional champions.

Franklin scored a run in the bottom of the fifth and five more in the latter half of the sixth to walk away with what might have seemed like an improbabe win at best.

In the end, the Bulldogs recorded only four hits in the contest, drew seven walks, committed four errors and saw 12 batters strike out against Wesson.

Dalton Meadows was 1-for-4 at the plate for Franklin County with his lone hit being a phenomenol three-run homer in the bottom of the sixth that put the Diamond Dawgs on top for good.

Additionally, Ridge Clanton finished the game 2-for-4 with a run scored and Dakota Chisholm was 1-for-3 with two strikeouts.

In the top of the first frame, Wesson scored three runs thanks to a trio of FC errors. The bottom half of the stanza saw Bulldogs' Donovan Moore and Noah McCormick draw walks and would be left stranded when the side was retired.

Wesson added a run in the second for a 4-0 lead before FC's Larry Pernell reached base on a walk in the latter half of the stanza and was ultimately left on the pond as the team could muster no run support.

Clanton singled and McCormick walked in the bottom of the third only to be left stranded as well to leave the Dawgs little to show for their efforts before Friday's storms hit.

In picking up where they left off on Tuesday in the fourth inning, the Wesson and FC offenses were held scoreless. However, the two teams gained a run each in the fifth.

Trailing 5-0 in the bottom of the fifth, Bulldog Jamari Tolliver walked and scored on a Cobras' error to put Franklin County's first run on the scoreboard.

Also in the frame, Moore and McCormick both walked again and Clanton stroked a single, but they all failed to make it home.

In the sixth, Franklin made the most of its situation with one out as Pernell reached base after being hit by a Wesson pitch. Chisholm then followed with a single to short and Tolliver made his way to first on a failed fielder's choice attempt by the Cobras.

WIth Pernell at third, Chisholm at second and Tolliver at first, Moore went down swinging for Franklin's second out.

Clanton then came on to hit a 1-0 count ground ball that was mishandled by Wesson at third and green lighted Pernell to come home for his team's second run that cut the Cobras' lead to three, 5-2.

JaMarlin Green, who came in as Chisholm's courtesy runner, plated FC's third run on yet another Wesson error with Tolliver and Clanton moving to third and second, respectively, on the same miscue. Then, with Meadows facing a 2-1 pitch count, the third baseman connected solidly with the ball and sent it over the left field fence for a three-run homer to finally put Franklin on top, 6-5.

Prior to this at-bat, Meadows had struck out three times in the game. He also finished as his team's leader in RBIs with three.

The top of the seventh saw FC's defense give up only a single to the Cobras to hold on down the stretch for the victory, which pushed the Bulldogs to a 15-2-1 regular season record.

Tolliver, despite being 0-for-2 with a walk, crossed home plate twice in the game and had a pair of steals while Clanton (who was the only FC player to reach on an error), Meadows, Pernell and Green scored one run apiece.

McCormick walked three times and had a strikeout while Moore reached on walks twice and struck out once.

Defensively, McCormick and Pernell were credited with a double play against Wesson.

In terms of pitching, Tolliver started the game on Friday and worked one-and-a-third innings where he surrendered three runs (one of those earned) on four hits while striking out one and walking two on 40 total pitches. His pitch-to-strike ratio was 52.5 percent.

Clanton worked the final five-and-two-thirds innings to earn the win for FC by throwing a total of 60 pitches. He gave up one run on two hits while striking out three. Clanton's overall strikes thrown total was an impressive 73.3 percent.

The victory means Franklin County advances to the post-season as the No. 1 seed from District 7-3A. The Dawgs will play host to District 8-3A No. 4 seed Saint Patrick of Biloxi on Friday for the first round of the best-two-of-three series. The second game of the three-game series will be played on Saturday on the Mississippi Gulf Coast with a third game, if needed, likely being played Monday back in Meadville.