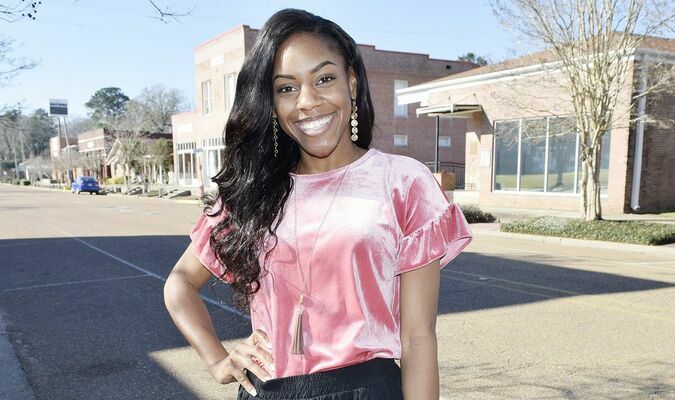 While no stranger to the pageant scene, Johnson, who is the daughter of Carl and Melody Johnson of McCall Creek, said some time has passed since she last took part in this kind of a program and she is excited to have the opportunity to represent her community.

“The earliest pageant I was involved in came during my freshman year at Franklin County High School,” she said. “I don’t think I really wanted to do it at the time, but I believe my mom pushed me to do it, and I wound up winning.

“At the same time, I was involved in cheerleading and I think that also helped me become more comfortable in front of people. I continued with pageants and cheerleading throughout high school.”

She also took part in and won the “Parade of Beauties” pageant during her time at Southwest Mississippi Community College in Summit — the last time she took the stage in a competitive capacity.

Now, Johnson said her involvement in this year’s Miss Mississippi USA program comes with an entirely different motivation to participate.

“I became inspired again to get involved, but this time was different because I knew I wasn’t wanting to do it just for me,” she added. “I understand I have a bigger purpose, and want to share my voice because this program stands for confidence and purposeful living for women.

“As I represent my hometown and my county in this pageant, I want to exemplify being a strong individual who pursues something bigger, who steps out and challenges the norm and refuses to accept mediocrity.”

Johnson said she is constantly awed by how deeply God has blessed all aspects of her life — guiding and teaching her to be her best self in preparing her for this next step.

“I had to get to the core of being true to myself,” she noted.

“For me, that meant stepping out to do some things out of the ordinary in all aspects my life. I wanted to see what opportunities there were out there for me.”

A 2012 FCHS graduate, Johnson went on to attend classes at and graduate from Southwest Mississippi Community College.

She also attended Belhaven University before transferring to Mississippi College and earned her degree in elementary education in 2018.

Johnson taught kindergarten and first grade in both Brookhaven and McComb, but opted to broaden her horizons beyond the classroom in 2020 by pursing a career path in interior design.

“I’m an artist at heart, and, this past year, I created and opened my online art shop via Etsy,” she said. “As far as my interior design work goes, I’m working to build that from the ground up.

“I have always loved art and design and I felt like being in the classroom maybe stifled my passion for those areas of my life. Being a teacher takes a lot, and my art fell by the wayside. I started to think of ways that I could incorporate art back into my career now because that is what I really enjoy.”

Starting a business during a global pandemic has been a challenge, but Johnson said there is also an upside to it as well.

“I found that a lot of information I needed to start my business could be found online from sources like YouTube and Google,” she continued. “On a lot of these sites, people, who are in a similar field, will share their backstories and make a way to contact them to learn more about how they did it.”

Johnson has also enjoyed the chance to sit down face-to-face with interior designers, who have shared helpful tips on topics ranging from tax information to best phone apps to conduct her business.

“When starting out, things can be a little slow and can get discouraging, but I have a good support system that I am continuing to build,” she said. “People have reached out to me and have really encouraged me along the way, and that has been a blessing.”

To this end, Johnson said she similarly desires to encourage youth to be proactive in being their best selves and unleashing their potential for personal growth and development.

“In fact, they should know their value isn’t based on their social media presence or how much applause they get online, but rather on their identity as perfectly loved and capable individuals,” she added.

“Our younger generation has such a bright future, but they need a positive voice in their lives helping them visualize it. As a former teacher, I understand that importance.”

She said her greatest fear where young people and social media are concerned is the “performance” aspect of online platforms — missing out on who these young people really are on the inside.

“The truth is that some of us are so connected with social media — as I once was two years ago — that we can lose who we really are in the messages,” she said.

“At one time, I was really connected online, but I have focused more on myself as my identity does not change because of outside things going on,” she said. “As my relationship with God has grown, He has shown me that His plans for me are big and can’t be limited by what people think.”

Johnson characterized stepping back from social media influences in her life as difficult to say the least.

“I started small and took a fast for a few months and found that my desire to be online dissipated,” she continued. “After I had met my fasting goal, I found I could get back on, but really didn’t want to.

“During this time, I had to find I was secure apart from the image I was trying to portray to people and that my true identity was in Christ. I never want to fall into the trap of being something I’m not on social media.”

Still, Johnson’s business requires a social media presence, but she said God helped her find a happy medium in this regard.

“That included playing it safe, avoiding negative feeds and establishing boundaries,” she said.

“Realistically, I know temptation will try to get you to fall back into those old habits, but now I am stronger and understand the importance of balance.”

Johnson said she would love to have the support of Franklin Countians in her pageant journey and plans to work diligently to become Miss Mississippi USA.

“To every Franklin County business, I want you to know this is a perfect opportunity to show, in a tangible way, that they support and value someone in their community taking steps to not only better themselves, but also inspire others to do the same,” she continued.

“If you would like to donate to help with my expenses to participate, you can make a payment online in my name at www.missmississippiusa.com/onlinepayment or you can reach out to me personally by calling 601-384-6658.”

Pageant participants are required to raise $1,195 in fees to take part in the program.

Tickets for the pageant will go on sale in the coming weeks.

Johnson also took the opportunity to praise the love and support she has received from her family — specifically her parents who sent their seven children to college before returning to get their higher education degrees.

In fact, Carl and Melody Johnson were featured nationally on the Ellen DeGeneres Show in 2020 spotlighting their tight-knit family and the hometown values they embrace.

“We’re a very close family and I am thankful for their supporting me in everything I do,” she continued.

“I want to share with my nieces, Haylie and Hannah, that no matter how big their dreams, they are worth pursuing and they can absolutely accomplish them with determination — that’s our family’s desire.”